HAVE YOU EVER BEEN TO SKARZYSKO?: A SURVIVOR’S STORY 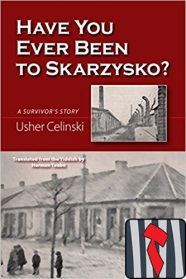 Usher Celinski died in 1984. Sometime later, his family donated his hand-written, Yiddish manuscript to the U.S. Holocaust Memorial Museum. When the archives at the museum asked Herman Taube, renowned Yiddish writer and poet, to translate it, he agreed. The result is this book. Skarzysko-Kamienna was not only home to a substantial Jewish community; it was also the site of a munitions factory, which the Germans continued to operate, using the Jews as slave laborers. Celinski grew up in the town and also was forced to labor in the camp. Later, he was taken to Buchenwald. His story is brutal in its detail, honest and poignant, and is translated with a care, sensitivity and accuracy that only Herman Taube could bring to us.