Courage Was My Only Option: The Will to Survive, the Strength to Remember 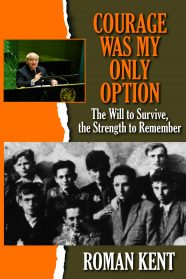 Like nearly all Holocaust survivors, Roman Kent has to live with impossible memories.  There are visions of loss and destruction, of unimaginable horrors.

Born in pre-war Poland, as Roman Kniker, his mostly idyllic childhood in Lodz was shattered in September 1939 with the Nazi invasion.  In the Lodz Ghetto, the situation was difficult with horrendous living conditions and profound deprivation and the Kniker family, like everybody, suffered greatly under Nazi cruelty; his father, whom they called Tatush, Mamma, sisters, Renia and Dasza and brother Leon. Their family was broken apart, their property confiscated, and even the adored family dog Lala was taken from them.

When the Lodz Ghetto was liquidated, things  became even more perilous. After four days packed together in a boxcar, the family arrived at Auschwitz-Birkenau where a process of complete dehumanization began. After a selection that separated Roman and Leon from

Mamma, they were sent to the main camp. The smells of the crematoria, the gallows outside the window and the regular gunshots mixed with starvation and the guards’ brutality made life unbearable.

With their health deteriorating, and facing certain death, Roman and Leon tried to attach themselves to an outside work detail.  They earned a temporary —and still very dangerous—respite of sorts at the Gross-Rosen Concentration camp, but soon found themselves at the notorious Flossenburg Concentration camp.

Together, the young brothers survived and were liberated by American troops. And living for a time as refugees,  they were sponsored to come to Atlanta and begin the semblance of a normal life.

And what a life it has been. A successful businessman and family man, Roman turned his attention to Jewish communal life, focusing on remembrance combined with justice and compassion for his fellow Holocaust survivors.  This proved to be an endless endeavor. Numerous negotiations with world leaders about claims for lost property or slave labor and battles about who should represent the survivor community have filled his senior years, even now in his ninth decade.

As Michael Berenbaum, noted Holocaust scholar, said about the original version of Kent’s autobiography:  “Few have written detailing the politics of this chapter of contemporary Jewish history. Fewer have written with such courage and with so deep a sense of justice.”

This new edition is not only an effort to make Roman Kent’s inspirational story available to a new generation, but also to emphasize that there is still much work to be done.