CAPTAIN REIFER: THE BATTLE FOR WHAT WAS ALREADY LOST 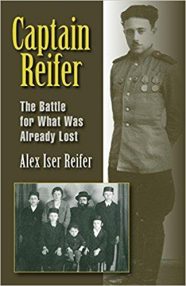 Not a traditional Holocaust memoir, Alex Reifer’s story will prove to be important for a better understanding of the era. Reifer was victimized by the Holocaust, losing his parents, grandparents and all four of his brothers. As a Russian intelligence officer he was able to take part in the liberation of his fellow Jews. Later he witnessed its aftermath. Reifer was born in 1921, growing up among the Bovever Hasidim in Oswiecim, Poland, the later location of Auschwitz-Birkenau. When the Nazis invaded, the entire Reifer family fled east. When it became physically too difficult, they returned to the town, except for Alex who was urged to continue. After finding work in a coal mine, Alex joined the Russian Army, rising in the ranks and serving until after the defeat of the Nazis. He took some comfort in telling captured German officers that he was a Jew and watching their fearful reaction. In Germany, he try to set up assistance for the survivors. Later, he returned to Oswiecim to find what had become of his family. Sadly, they had all been murdered. He visited the Death Camp at Auschwitz at time when almost nobody in the West had as yet seen its horrors. Returning to Germany, he planned a career in the Army, but began to realize it was not for him. He took off his uniform, made his way to Belgium and eventually to America.